As our month of house-sitting came to a close, we finally started the sail cover project. The old one had been patched so many times I had not realized what a simple pattern it was until I watched the Sailrite video. With a week left in a large space, we were eager to finish before time ran out. It was clear after working on the cockpit cover that doing canvas work of this size would be incredibly difficult on the boat.

After some research, we measured the boom and mast ordered a sail cover kit from Sailrite.  This included a 5'x21' roll of blue Sunbrella with a cutting pattern already drawn on it.

The assembly was pretty straightforward, especially with the cockpit cover repairs under our belts.  It had a few long seams, which we marked, taped, and creased with a bone folder before sewing. It took two of us to feed the material through the machine.  We had not anticipated the size and weight of the fabric. Twenty-one feet of Sunbrella is heavy and awkward. We had envisioned Wayne working on other things while I sewed. In reality, this entire project was a two-person job. After the first few seams, we rolled and unrolled the length of the fabric as we went, pausing every few feet to adjust. We were lucky our hosts had a huge dining room table with a thick pad. 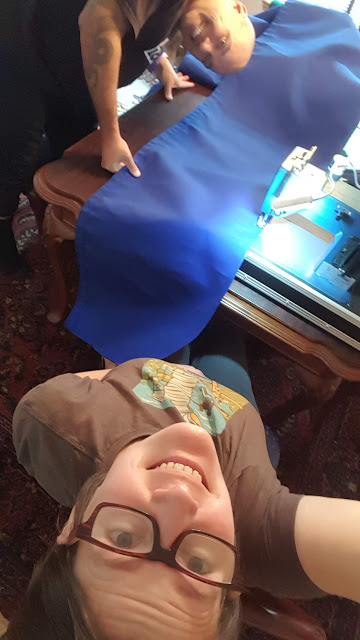 We started on Saturday morning and had the bulk of the sewing done by the end of Sunday. The last stage of building the sail cover required hauling it down to the boat and checking the fit. We still needed to cut off the aft end, add a draw cord, and determine where to place the common sense fasteners along the bottom edge. The old cover had fasteners that were difficult to reach with the cockpit cover in place, and we hoped to improve access in the new cover.

We finished all of the sewing before leaving the house, then waited about 3 weeks for a sunny weekend day to attach the fasteners.

I'm glad we waited to tackle the sail cover project until we had built up some sewing skills.  We felt triumphant when this large, visible project was finally finished and installed. Having new windows and a bright new sail cover helped to make the winter a little less grey and a lot less wet. Our only criticism of the Sailrite kit was that we would have liked a little more height on the mast. There are two winches just below the bottom of the cover that still need protection. If we had designed it ourselves, we would have taken them into consideration. I plan to add a skirt piece for that purpose before the rains return this fall.