Showing posts from June, 2020
Show all

Here's where things get interesting. This is Part 3 of our engine removal. Another way to preface this is: "If it ain't one thing, it's every other damned thing." Part 1: Towards Electric Drive Part 2: Removing a Large Engine While in the Water Surprise! Churn What I Would Have Done Differently The gantry has proven itself well. It pulled everything thus far with no creaks or groans. Now to test lifting the engine! Here we are testing it all out. No groans or creaks. The gantry is solid and performing as expected. Surprise ! And then... this. Well. Shit. The crack doesn't look so bad because the engine has been put back down on the stringers. We overbuilt the gantry beam. Two 2x6 fir beams should have been sufficient, so of course we used two 2x8 beams through-bolted so they behave as one beam. It turns out that materials capacity tables can't take into account defective materials. One of the 2x8 beams snapped at a knot on the bottom of the board. Fortunat
1 comment
Read more

This is Part 2 in our adventures in repowering our sailboat with electric drive. Based on questions and feedback, this is going to be long. I try to keep the detail relevant to people who may want to do this themselves. We are happy to answer any questions that arise. Part 1, "Towards Electric Drive" is here. Part 3. "Actual Engine Removal" is here. The Problem(s) The Planning The Execution The Problem(s) All of that is coming out. All of it. Most of the time, we get to stand on the shoulders of sailors that did something before we did. Most sailors don't have a Large Diesel Engine they are trying to remove in an unconventional way. There is some information out there on removing engines from boats, but they all involve smaller engines or a boatyard and large crane. We had a few problems to solve. Working on your house while you live in it is always a tile puzzle game. Even more so on a boat. The overarching problem is: we need to lift Large Diesel Engi
Post a Comment
Read more 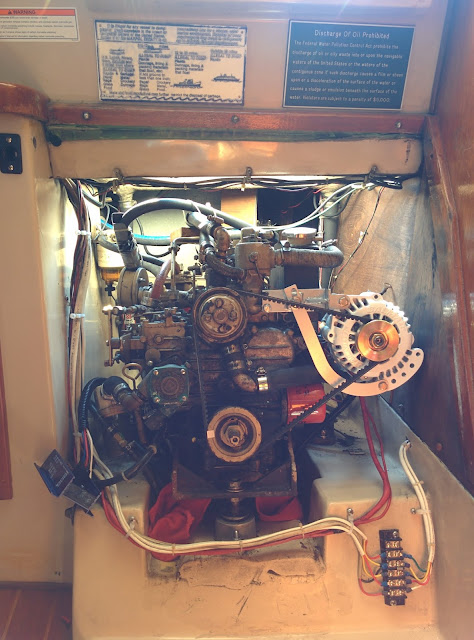 This is Part 1 in a long journey. Part 2: "Removing a Large Engine While in the Water" Part 3. "Actual Engine Removal" is here. Background Why What Background I wanted electric drive since my first sailboat. The voltage regulator in that boat died because the previous owner just dropped in AGM batteries while using the same internal voltage regulator. This can be a non-issue if AGM batteries are never deeply discharged. But I discharged the batteries to 60% on a long sail. AGM batteries can accept up to 50% Amps (A) of the Amps-hours (Ah) removed. For example, if 500Ah were taken out, the batteries will gladly gulp down 250A when the alternator gets energized. AGM batteries require a a regulator designed for the charge profile of that chemistry. Just slap on a new Balmar with an external regulator and call it done, right? Wrong. What was a "simple" $1000 replacement quickly ballooned to $3500 and four months because of other issues, custom fab, a
Post a Comment
Read more
More posts