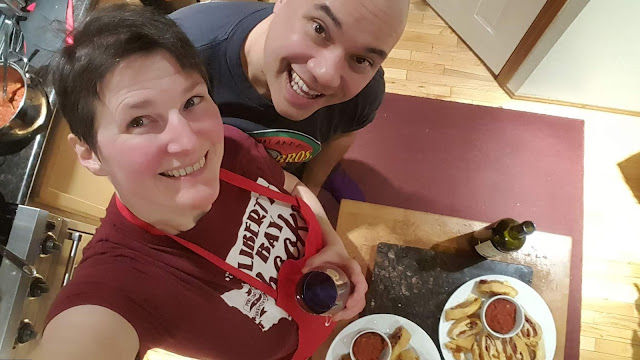 Stromboli are hard to find in Seattle. Sometimes we'll be lured by a menu listing stromboli only to discover a calzone or sandwich in its place.  So far we've only found one reliable option to quell our stromboli desires: Anita's Place at Boston's in Bremerton.  We've eaten many delicious meat pockets there, but they changed hands a few months ago. Wayne read some unfavorable reviews of the new menu, but we have found that restaurant reviews in Bremerton don't generally agree with our tastes. We decided that empirical testing was required.

Previously, I'd never felt the slightest urge to linger. The remodeled space is inviting, with more comfortable chairs and cloth napkins on the tables.  There are books on the windowsills next to the tables. We leafed through Lonely Planet's Epic Bike Rides of the World while we waited for our take out order.

I'm thrilled to report that the stromboli were attractive and delicious. In the past, I would ration my side of marinara and sometimes end the meal with a few dry bites. The new version was moist throughout - we each finished with a little bit of sauce left. It's not rolled but folded and pinched like a pasty or calzone, with a  a crispy bottom and a lovely golden sheen on top.  The juicy meats (meatballs, sausage, pepperoni, capicola, and salami) were blanketed in melty mozzarella and provolone.
On our third date, we ate stromboli (from the old Boston's) in the cockpit on a sunny afternoon, and ever since that day we've talked about making our own. While house-sitting in February, we finally followed through.


Don't skimp on the quality of ingredients.

This recipe is simple, so high quality ingredients will shine. Central Market (best grocery store ever!) had everything we needed except Hefeweizen for the dough. A few years ago it was everywhere, but now IPAs dominate the beer coolers. So we required a trip to A-1 Hop Shop, where we picked up a German Hefeweizen and a variety of other tasty libations and heeded the recommendations of the staff. They've never steered us wrong.

Our recipe, because screw most people's idea of pizza dough.

This can be made up to a week in advance (or more if you freeze it). The dough will be better if allowed to rest in the refrigerator overnight.

The key here is to replace all the water in the recipe with Hefeweizen beer. This is the secret weapon of a pizza dough that tastes great completely on its own. For excellent flavor in any dough, not just pizza, use a slow first rise time. Putting your dough in the refrigerator overnight allows for deeper flavors to develop. Your patience and foresight will be deeply rewarded.

Cook the sausage by putting some red wine in a frying pan on medium-low heat. Generally use a liquid in the pan when cooking raw sausage. This allows you to get the sausage completely cooked while controlling the browning. Use just a little less liquid than would cover one-third the height of the sausage in the pan. Cook gently, turning occasionally, and then reduce the liquid. Brown the sausage to your desired amount of Maillard reaction. Deglaze the pan to oomph your sauces. Drink the remaining wine.

This can be made ahead and refrigerated. Just heat it through while you bake the stromboli.

Place a large pot or skillet over medium heat and add the olive oil. Add the garlic and cook, stirring often, until it starts to soften and caramelize a bit. Add the tomatoes and herbs and simmer until thickened to your liking, 15-20 minutes, stirring frequently. Add pepper to taste and stir in the basil. Add a little salt, then gradually add the parmesan to taste. The cheese is salty, so you might not need all of it.


How to Roll a Rectilinear Piece of Dough.

Remove dough from refrigerator at least one hour prior to cooking. Allow to come up to room temperature and rise until almost double in volume.

Punch down the dough a bit, then pinch off about 1/6 and shape it into a smooth ball. Place it on a smooth counter or cutting board (no need to flour it). Pat it into a circle with your hands, then use a rolling pin to roll it into a rectangle roughly 9"x 12". Start from the center of the dough and roll away from your body, then turn the dough 90 degrees and roll again. Don't press too hard, and use even pressure - you want an even thickness throughout. You're encouraging it to spread, not smashing it. Keep rolling and turning until you've got a decent rectangle. It doesn't have to be perfect.

Orient the dough so one of the long edges faces you, parallel to the edge of the counter. Starting at the left short edge and leaving a 1/2" gap along each edge, place a layer of slightly overlapping pepperoni slices down the left side of the dough. Place a layer of provolone slices atop the pepperoni. Now add a layer of coppa to the right of the pepperoni. Repeat, alternating the meats, until you've covered the sheet of dough. Place 2 half links of sausage parallel to the short side of the dough, then cover with sliced mozzarella.

Starting at the short edge, roll the whole thing snugly but without pulling too much and stretching the dough. Tuck in the ends and pinch slightly to seal. Transfer to a sheet pan lined with parchment or a wire rack on a sheet pan lined with foil. Lightly brush top of stromboli with egg; this produces the shiny golden top during baking. Cut slits in the top layer of dough to vent steam and prevent the stromboli from puffing up during baking.

Bake the first two stromboli while you roll the next two. They should take 30-40 minutes. Look for a golden brown crust and bubbly cheese. They will be steamy, so let them rest for 10 minutes or so before slicing.
Slice it up for optimum sauce coverage and less danger of sliced meat sliding out onto your chin and burning your face.