Neither of us had been to Toronto, but Wayne's work sent him there for a week in August. I went along to see the city, and of course, eat.

The drive from the airport into the city took us past many walkers, runners, cyclists, and rollerbladers making use of trails and parks along the waterfront. Bicycles are treated as a part of the flow of traffic downtown and share the roads with cars. Bike share stations are plentiful, and cyclists are everywhere. Yay bikes!

As certified Seattle Coffee Snobs, we expect disappointing coffee when we travel. Our first morning at the hotel brought a pleasant surprise: excellent coffee at Bluestone Lane without leaving the building. There is no comfort like surprisingly good coffee in a strange place (and in a chain coffee shop no less).


Wandering around during the lunch hour, I saw hundreds of office workers sitting around fountains and in parks, eating from take-out boxes. I remembered then that most of the shops in downtown Toronto do not have street-facing storefronts. A network of nearly 20 miles of tunnels create the world's largest underground shopping complex with 4,000,000 square feet of retail space, mostly invisible from street level. This makes sense in a city with cold, snowy winters, but it was disorienting. Another thing I had forgotten about international travel: at home, I recognize a chain store when I see one. As a fan of small businesses, it is harder to spot them.

Tiki Time
A good tiki bar feels removed from normal life; the real world must not intrude. The lack of windows gives the proprietors complete control over lighting and sound. Bartenders in bright patterned shirts concoct complex drinks while having relaxed conversations with patrons. When a tiki bowl drink is served, fog rolls out, sound effects play, and the staff make it an event. Sparks fly when cinnamon is sprinkled liberally over the flaming beverage. Rum, lime, and coconut feature prominently.

The Shameful Tiki Room is no exception. with top notch drinks (including the best Painkiller anywhere), outstanding service, and perfect ambience. Inspired by the decor, our friend Johnathan brought an extra flavor: he treated us to some hakas that he learned in his years among the Maori in New Zealand.  Otherworldly.

Hockey Homeland
I spent a few hours one afternoon at the Hockey Hall of Fame, which is worth a visit for any fan. I loved it, but Wayne would have been bored out of his mind. Follow my lead: go with people who care about the sport or go alone.

At first glance the Hall is mainly comprised of informative displays featuring gear worn by the game's icons, but interactive games lend an air of fun to the space. Kids and adults test their skills shooting against legendary goalies or defending against the greatest scorers, cheered on by their friends and families. Movies play in several areas, and I sat for a few minutes to relive the highlights of the Blackhawks' 2013 Stanley Cup victory.

Up a flight of stairs I entered the Hall of Legends, a light-filled room that honors Hall of Fame inductees and houses NHL trophies, including the Stanley Cup.  A beautiful rose window high overhead lends the air of a cathedral to the ranks of plaques honoring the heroes of the game.  The former bank vault houses the retired rings of the Stanley Cup, where I sought out the engraving from Seattle's 1917 win. 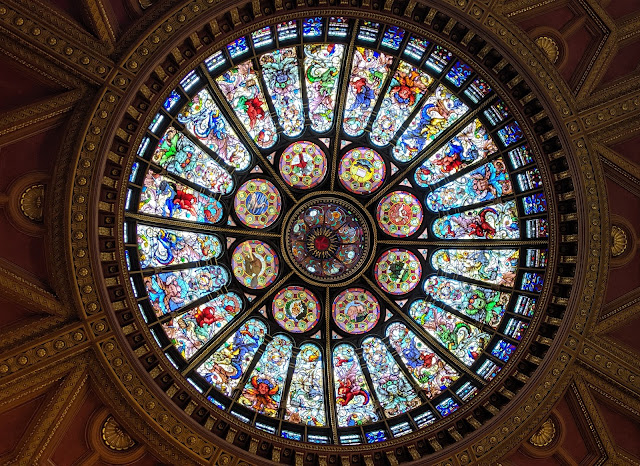 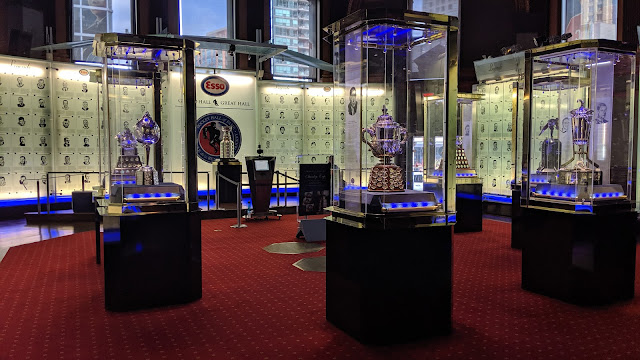 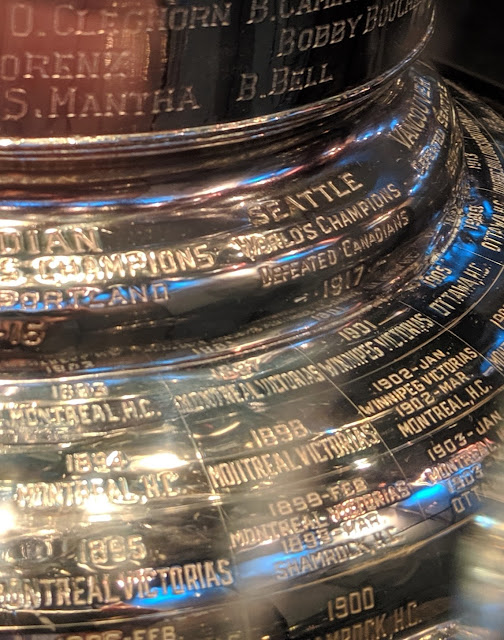 Dumpling Destination
When asked about uniquely Toronto foods, respondents to our informal survey came up empty. However, the bartender at the Shameful Tiki Room pointed us toward several restaurants in and near Chinatown. Most of his recommendations were either out of our budget for the night or required reservations well in advance.

A little internet research turned up a place that sounded right up our alley: Yummy Yummy Dumplings. Nestled among other retail storefronts below street level, it was hard to spot until we were right in front of it. The unassuming dining room was about half full when we arrived, but by the time we left, people were waiting for tables and take-out orders. We ordered an assortment of fresh rolls and pan-fried dumplings, and they were all yummy as advertised. We were sad that we would not have time to return on this trip, nor did we have a way to reheat leftovers. 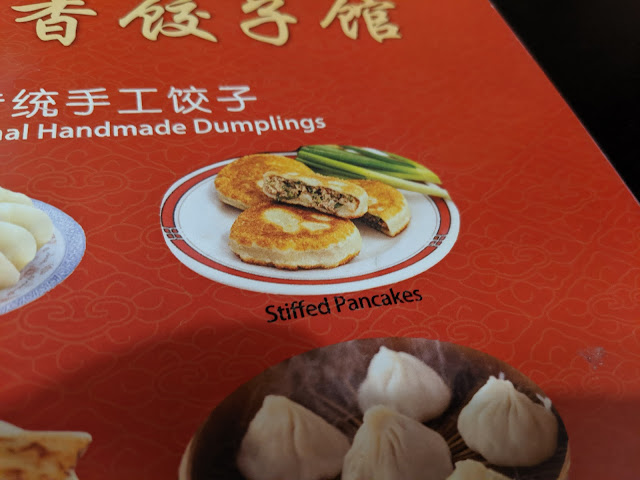 Water and Wine
The Seattle team had planned on taking the train to Niagara Falls on our last full day, but Ven, who works in the Toronto office, offered to drive us. Thanks Ven! The weather cooperated, and we spent a leisurely hour admiring the falls along with hordes of other tourists. Actually, parking was easy and traffic sparse. Weekday mornings must be the right time to view the falls.


Selfies taken, we drove north along the Niagara River to Niagara on the Lake, a small tourist town on (you guessed it) the shore of Lake Ontario. This place is the definition of quaint tourist town, complete with historic homes, candy shops, restaurants, art galleries, and clothing boutiques. Our group split up to roam a bit, and Wayne and I sampled a flight of beers at a The Exchange Brewery before ambling down to a small waterfront park with views of Fort Niagara and the distant Toronto skyline.

Wineries are abundant in the area, and several people had suggested that we eat lunch at Two Sisters Vineyards a few miles from town, so off we went in search of sustenance.