November 12, 2019
OOPS! I wrote this post 243 days ago and just discovered my failure to post it. With Thanksgiving a few weeks away, it is seasonally appropriate again. I'm feeling iffy about my assertion that Pi Day is the year's best holiday. Thanksgiving will always be the ruler of all holidays in my book because it is so intensely food focused.

So, what pie is your favorite? This year our self-proclaimed coconut-hating hostess has requested Dahlia Bakery coconut cream pie, and I want chocolate bourbon pecan. I'll make at least one other, possibly this one or something similar. And of course there will be an absurd quantity of fresh whipped cream.

3/14/19:  Inspired by an early morning text from Wayne wishing me a Happy Pi Day, I sprang rolled out of bed early, donned my Pi Day shirt and ran all of my errands by midday. I needed time to make my first pie on the boat in celebration of the year's best holiday, which had arrived while I had my back turned.


Not quite ready for a full-on flour and butter pastry, I googled "nut crust" and came across this one from Food52. I love chocolate and cinnamon, but I find them to be unreliable co-conspirators. I lack a tart pan, and I thought the 9" tart would look sad in a half-empty (half-full? You decide!) pie pan. I multiplied everything by 1.5, ditched the cinnamon, and added vanilla and salt.

I also softened the butter before adding it to the crust mixture.  My honey was cold and crystallized, and a little warmth made it easier to blend. The oven is relatively untested; most of our baking thus far has been flexible - like roasted veggies and cheesy baked pasta. The crust got a bit singed on top after 8 minutes, so I moved it to a lower rack and covered the top with foil for the last few minutes.


As I poured the filling over the crust, I realized that I would need to chill the whole thing for a few hours. That meant figuring out how to stack everything evenly in our top-loading fridge, then hoping the waves wouldn't slosh the filling over all its other contents. I let the filling cool longer at room temperature in hopes that it would set enough to keep the filling in the shell. Thankfully, it worked.

I thought this pie might need another flavor to play with the chocolate and pecans, but inspiration eluded me. Maybe ginger-bourbon whipped cream? I washed the dishes, and while putting away the chocolate, it hit me: toasted coconut! Eureka!

1. Chop the pecans in a food processor until crumbly.

4.Stir the honey and butter into the pecans with the back of a spoon until combined.

5. Press the nut mixture into the pie pan with your hands until it evenly coats the bottom and most of the sides of the pan.

6. Bake about 10 minutes, until the nuts are toasted and golden.


7. Cool the crust completely while you make the filling.

8. In a saucepan large enough to hold all of the ingredients, heat the cream until bubbles form at the edges of the pot.

9. Remove the cream from the heat and add the butter and chocolate all at once and let stand for a minute or two.

10. Gently stir the chocolate into the cream until melted and homogeneous. Stir in the vanilla.


11.Let cool for a 30 minutes, stirring occasionally, before pouring into the cooled pie shell.

13. Toast the coconut in a dry skillet over medium-low heat, tossing frequently to avoid burning, until most of the coconut is golden brown.  Set aside to cool. 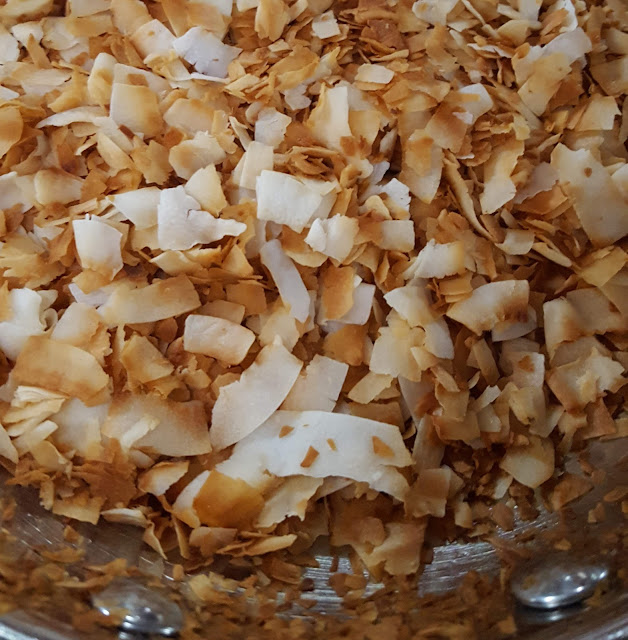 14. In a large mixing bowl (cold if possible), whisk the cream to soft peaks. I like doing this by hand, which takes less time, but a stand mixer or immersion blender with a whisk attachment will save you some arm fatigue.

15. Call some friends. This pie is rich, and everything tastes better when you share.

15. Serve each slice of pie with a generous dollop of whipped cream and a handful of toasted coconut.